We are sad to announce that Deirdre Bair, the author of Parisian Lives, has died at 84.

She was an unknown writer with no experience in biographies when she wrote to the elusive Samuel Beckett. To her surprise, he wrote back…

Deirdre Bair, who as an unknown writer half a century ago scored a coup by getting the reclusive Samuel Beckett to agree to let her write his biography, then secured the same permission from another towering literary figure, Simone de Beauvoir, died on Friday at her home in New Haven, Conn. She was 84.

Her daughter, Katney Bair, said the cause was heart failure.

Ms. Bair called herself “an accidental biographer, one who had never read a biography before she decided that Samuel Beckett needed one and she was the person to write it.”

She came to that decision somewhat serendipitously. Having received a fellowship to do graduate study at Columbia University, she needed a research subject. After making too-slow progress on a medieval-studies topic, she decided to turn to a 20th-century author instead. She wrote the names of some possibilities on index cards.

“Without thinking about which name might present the best opportunity for original research,” she said years later, “or even which I liked the most, I shuffled them into alphabetical order. There were no A’s, and Beckett came first, before Joseph Conrad and E.M. Forster. Beckett it shall be, I said to myself, and that was how my life in biography began.”

She dove into a study of his novels (“Molloy,” “Malone Dies”) and plays (“Waiting for Godot,” “Happy Days”) and, she said, “reading Beckett’s work made me want answers to a lot of questions, all of which were based on the life from which the work sprang.” Eventually she decided to attempt a biography and, from her home in Connecticut, wrote to Beckett in Paris in July 1971.

“The mail between New Haven and Paris was probably never again as swift as it was during that exchange,” she said. “A week to the day after I mailed my letter, I received his reply.”

To her shock, Beckett said, “Any biographical information I possess is at your disposal,” adding that “if you come to Paris I will see you.”

Years of interviews and other research followed before “Samuel Beckett: A Biography” appeared in 1978. The paperback release won a National Book Award in 1981.

Her biography of Simone de Beauvoir (author of “The Second Sex,” among other books) was also years in the making and written with its subject’s cooperation. It was published in 1990.

“To Ms. Bair’s credit,” Herbert Mitgang wrote in a review in The New York Times, “her book isn’t just a love letter but a fair-minded and often skeptical appraisal of Beauvoir’s life. At the end, I found myself respecting but not always liking Beauvoir and her circle because of the heavy cloak of arrogance they wove around themselves.”

The Times Book Review named it one of the best books of the year.

Ms. Bair later wrote biographies of the writer Anaïs Nin (1995), the psychiatrist Carl Jung (2003), the illustrator Saul Steinberg (2012) and Al Capone (2016), but her first two books remained her calling cards. People asked her about Beckett and Beauvoir so often that she wrote a book about her experiences as their biographer: “Parisian Lives: Samuel Beckett, Simone de Beauvoir, and Me,” published last year.

“The original idea was to write something primarily for scholars and writers that would cover all my biographies,” she wrote in that book, “to concentrate on the decisions I made when dealing with structure and content, or how I worked in foreign archives and languages, or how I dealt with reluctant heirs and troublesome estates. Each time I suggested this possible project, even to fellow biographers or academics, the response was always, ‘That’s all very nice, but please just tell us what Beckett and Beauvoir were really like.’”

Deirdre Bartolotta was born on June 21, 1935, in Pittsburgh to Vincent and Helen (Kruki) Bartolotta, and grew up in nearby Monongahela. In “One Extraordinary Street,” a documentary about the unusual number of prominent people who grew up on or near Park Avenue there, she spoke of being an enthusiastic reader as a girl, so much so that by fifth grade she had become bored with books for young readers.

She tried to check out adult fare from the local library, but the librarian would not let her, prompting her to complain to her father.

“He went down to the library, and he said, ‘You let my daughter read anything she wants,’” she said in the film. “So the next week I came home with ‘Forever Amber,’ which was that generation’s dirty book.”

She graduated from the University of Pennsylvania in 1957 with a degree in English literature and set her sights on a career in print journalism. While her husband, Lavon Bair, whom she had married during her senior year, was serving with the Sixth Fleet, she followed him around the globe and worked as a stringer for Newsweek.

When they later settled in New Haven, she was a reporter for The New Haven Register, raising their two young children and supporting her husband while he was in graduate school. In 1968 it was her turn to go to graduate school; she applied for a writing fellowship, but rather than take it at nearby Yale University, she chose an institution two hours away.

“I thought, ‘I’d better go to Columbia, because what if I fail?’” she said in a recent talk at the Free Library of Philadelphia. “‘I can always say commuting got to be too much for me.’”

She did not fail; she earned a Ph.D. in comparative literature at the university in 1972. By then she had already had her first meeting with Beckett. His initial words to her, she wrote in “Parisian Lives,” were, “So you are the one who is going to reveal me for the charlatan that I am.”

They talked for two hours on that occasion, the first of many interviews. Beckett, she wrote, told her near the end of that first session: “I will neither help nor hinder you. My friends and family will assist you and my enemies will find you soon enough.”

In the 1980s she was back in Paris interviewing Beauvoir, who, she said, could be mercurial, especially if Ms. Bair’s questions ventured into areas she didn’t want scrutinized. Once, when they had been working together for three years, Beauvoir abruptly stopped the interview and told her to leave.

In addition to her other biographies, Ms. Bair wrote “Calling It Quits: Late-Life Divorce and Starting Over” (2007), examining the phenomenon of couples who divorced after decades of marriage. Although she did not dwell on it in the book, her own marriage had ended after 43 years.

In addition to her daughter, Ms. Bair is survived by a son, Vonn Scott Bair; a sister, Linda Rankin; a brother, Vince Bartolotta; and a granddaughter.

Ms. Bair told The Times Union of Albany in 1995 that the only response to her biography she received from Beckett, who died in 1989, was a brief note: “Dear Mrs. Bair: Seems a very handsome looking book.”

Beauvoir died in 1986, before that biography was published. In the book, Ms. Bair recalled what turned out to be her final meeting with Beauvoir. Their other sessions had always ended with a handshake.

“This time,” she wrote, “tiny woman that she was, she reached up out and half embraced me, tall woman that I am, by placing her hands around my upper arms and giving me a brisk shake.” 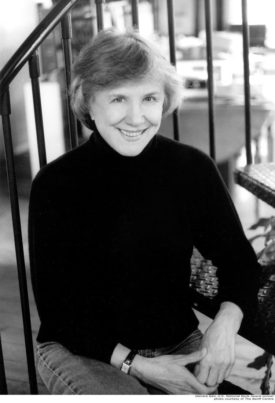