The Corvus team are delighted to reveal the cover for Death Message, Kate London‘s intricate, gritty and believable new crime novel about a mother and daughter in peril – and two police officers who set out to save them.

Death Message by ex-Met detective Kate London publishes in May, hot on the heels of her bestselling debut crime thriller Post Mortem. Packed with authentic detail, gathered from Kate’s time serving with the Metropolitan Police’s murder squad, Death Message is a thrilling drama grounded in the day-to-day realities of police work, perfect for fans of The Fall, Scott and Bailey, and Broadchurch.

October 1987: the morning after the Great Storm. Fifteen-year-old Tania Mills walks out her front door and disappears. Twenty-seven years later her mother still prays for her return. DS Sarah Collins in the Met’s Homicide Command is determined to find out what happened, but is soon pulled into a shocking new case and must once again work with a troubled young police officer from her past, Lizzie Griffiths.

PC Lizzie Griffiths, now a training detective, is working in the Domestic Violence Unit, known by cops as the ‘murder prevention squad’. Called to an incident of domestic violence, she encounters a vicious, volatile man – and a woman too frightened to ask for help. Soon Lizzie finds herself drawn into the centre of the investigation as she fights to protect a mother and daughter in peril.

As both cases unfold, Sarah and Lizzie must survive the dangerous territory where love and violence meet.

Kate London graduated from Cambridge University and moved to Paris where she trained in theatre. In 2006 Kate joined the Metropolitan Police Service. She finished her career working as part of a Major Investigation Team on SC&O1 – the Metropolitan Police Service’s Homicide Command. She resigned from the MPS in August 2014. Her debut novel Post Mortem was published by Corvus in 2015. 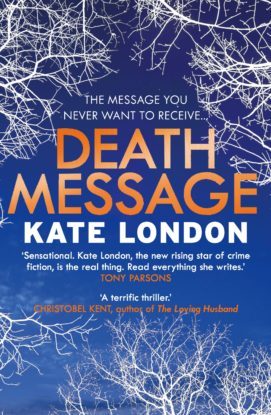