The Premio Valle-Inclán is a literary translation prize. It is awarded by the Society of Authors of London for the best English translation of a work of Spanish literature. It is named after Ramón del Valle-Inclán.

The 2018 Translation Prizes were awarded to books across a range of genres celebrating everything from short stories to art history in translations into English from Korean, Italian, German, French, Swedish, Spanish and Arabic.

“Seeing Red raises difficult questions about the line between love, pity, and sacrifice. Yet, there is a strain of dark humour running through the novel, including word play which rewards multiple readings. The distinctive style of the novel evokes Lina’s trauma, with sentences cut off mid-thought. Translator Megan McDowell expertly captures Meruane’s voice, making the brave decision not to make the text easier for an English reader.” 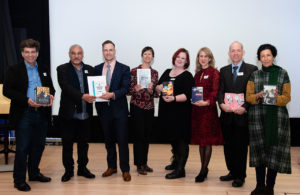