Hannah Gadsby’s powerful stand-up routine Nanette debuted in 2017, and garnered rapturous international acclaim when it was streamed on Netflix in 2018. Ten Steps to Nanette is a memoir that follows the funny and sometimes dark events of Gadsby’s life leading up to her realisation that she had to quit comedy as she knew it, a decision that she interrogates in her performance.

‘Seeing Hannah Gadsby perform Nanette in London was thought-provoking, uncomfortable and mesmerising, and I’m still marvelling at her honesty and audacity. It’s been thrilling to see the international reception to Nanette on Netflix, and we couldn’t be prouder to be publishing Hannah’s vital and extremely funny book on the Allen & Unwin list next year.’

Hannah Gadsby grew up in Tasmania and came to prominence when she won the Raw Comedy competition for new comedians at the Melbourne International Comedy Festival in 2006.

Ten Steps to Nanette will be published by Allen & Unwin in Autumn 2019. 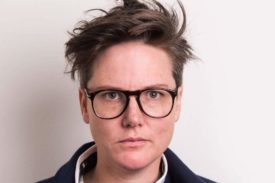