These two bestselling authors bring a live version of their hit podcast Science(ish) to Wimbledon. The event will use film excerpts as Rick and Michael look at iconic movies and attempt to explain the science behind them. From asking whether we could ever bring back extinct species (Jurassic Park), to whether it’s possible we are living in a computer simulation (The Matrix), this promises to be a real Festival highlight.

Rick Edwards is a writer and TV presenter. His book None of the Above helped explain the political landscape in the UK. Dr Michael Brooks is an author, journalist and a founding father figure at the New Scientist. 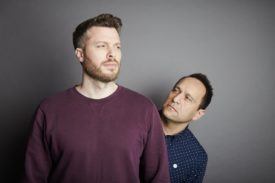