The fascinating story of discovering and excavating the ship wreck of the Esmeralda, from Vasco da Gama’s 1502-1503 voyage, shedding new light on Portuguese maritime trade and warfare in the Indian Ocean.

US-born marine scientist, researcher and deep-sea shipwreck hunter David Mearns OAM has found and filmed some of the world’s most famous and controversial shipwrecks; notoriously difficult wrecks that others predicted would never be found or their mysteries solved. Over his 30-year career he has led the research and discovery of 24 major shipwrecks achieving an overall success rate of 89%, and his company Blue Water Recoveries has been awarded three Guinness World Records, including one for the deepest shipwreck ever found at 5,762 metres. David is a fellow of the Royal Geographical Society and the Explorers Club. 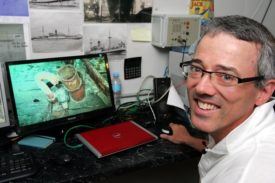