India’s first line was not completed until 1853 but, by 1929, 41,000 miles of track served the country. This vast network was a means for the colonial power to govern the huge country, serving its British economic and military interests. The Indian Railways network remains one of the largest in the world, serving over 25 million passengers each day. Christian Wolmar examines the chequered role the railways have played in Indian history and the creation of today’s modern state. 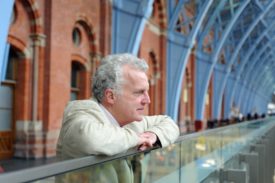