After more than a decade of reporting news and current affairs for Nine Network Australia, Brian Armstrong moved to Washington DC and began a life of travel and documentary filmmaking, and worked as a staff producer for National Geographic. He has produced more than 50 documentaries for National Geographic Television and other broadcasters. When he's not on the road or planning his next adventure, he tries to stay sober, patch up his marriage and co-parent his three children.
National Geographic has not endorsed this book. 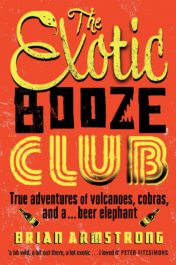