A woman dies in her sleep in a houseboat on the Thames; the apparent cause of death, an unflued gas heater. It all seems straightforward, but DI Kathy Kolla isn’t convinced. Both Kathy and DCI Brock run up against opposition in their investigation. An aggressive new commander seems to have a different agenda, focusing on the new realities of economic constraints, and favouring emerging technologies over the traditional policing methods. Old-fashioned coppers like Brock and Kolla are being squeezed out. To make matters worse, there’s a new Task Force moving in on their patch, and a brutal killer, Butcher Jack Bragg, to be tracked down and caught. It’s one of Brock and Kolla’s bloodiest investigations yet.

A heart-thumping read, The Raven’s Eye gives us Brock and Kolla under pressure; it’s a clash between the menacing ever-present eye of computer surveillance versus the explosive threat of a man with a meat cleaver and a grudge. 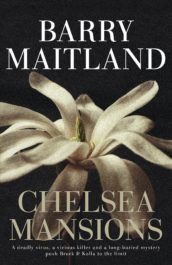