1205 AD: As a Knight of the Realm, Philip of Vercy has fought the infidel in the Holy Land. Now, after twelve months of savage, bloody warfare, he is finally coming home to peace, and to his beloved wife. But France offers neither comfort nor peace. His wife has died in childbirth and his young son is gravely ill. When Philip hears rumours of a healer in the Languedoc, a young woman blessed by God and marked with Christ’s Stigmata, he rides out on a desperate quest to save his child.

His journey takes him into a vision of hell that outstrips even what he saw in Outremer. Disgusted by the senseless slaughter, Philip gradually becomes embroiled in the Cathar cause. And then he finds his miracle, Fabrisse Berenger – beautiful, mysterious and bewildered by her terrible wounds. Together, the pair must flee persecution under cover of darkness – but they cannot hold off the Pope’s soldiers forever. Their destiny will be decided at Montaillet, the site of one of the most terrible massacres in history, where Fabrisse and Philip must make choices not just to save their lives, but their souls. 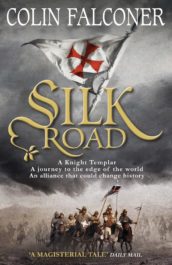