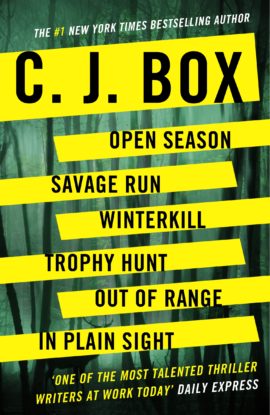 Open Season
Game warden Joe Pickett hears two sharp gunshots ring out months before hunting season and it’s his job to investigate. But then a poacher turns up dead in the Pickett’s backyard. How did the dead man get to his house? What was in the empty cooler by his side? And why do his colleagues want to sweep the case under the rug? Battling grudge-holding neighbours, corrupt officials and out-of-town activists, Joe begins to unravel a mystery that threatens both his life and the family he loves.

Savage Run
Game warden Joe Pickett is called to a bizarre crime scene deep within the forests of Twelve Sleep County, Wyoming. Famous eco-activist Stewie Woods has been blown up in an explosion, along with his new bride and ten head of cattle. With two unlikely allies at his side, and two hired killers on his heels, Joe can’t avoid the legendary Savage Run – a treacherous, isolated canyon with no crossing…

Winterkill
It’s an hour away from darkness, a bitter winter storm is raging, and Joe Pickett is deep in the forest edging Battle Mountain, shotgun in his left hand, his truck’s steering wheel handcuffed to his right – and Lamar Gardiner’s arrow-riddled corpse splayed against the tree in front of him. Lamar’s murder and the sudden onslaught of the snowstorm warn: Get off the mountain. But Joe knows this episode is far from over. And when his own daughter gets caught up in his hunt for the killer, Joe will stop at nothing to get her back…

Trophy Hunt
Local authorities are quick to label a rash of animal mutilations as the work of a grizzly bear, but Joe Pickett suspects that something far more sinister is afoot. And when the bodies of two men are found disfigured in the same way, his worst fears are confirmed: A modern-day Jack the Ripper is on the loose – and the killings have just begun.

Out of Range
A good friend, and fellow game warden, has killed himself, and Joe Pickett’s been chosen to temporarily run his district. But Jackson, Wyoming, is a far cry from Joe’s – and it doesn’t help that Joe feels compelled to investigate the circumstances surrounding his friend’s suicide. But as he comes closer to the truth, the more his own life spirals out of control – and he realizes that if he isn’t careful, he may be Jackson’s next victim…

In Plain Sight
Local ranch owner and matriarch Opal Scarlett has vanished under suspicious circumstances during a bitter struggle between her sons for control of her million-dollar empire. Joe Pickett is convinced one of them must have done her in. But when he becomes the victim of a series of wicked and increasingly violent pranks, Joe wonders if what’s happening has less to do with Opal’s disappearance than with the darkest chapters of his own past. Whoever is after him has a vicious debt to collect, and wants Joe to pay…and pay dearly. 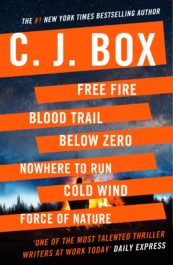 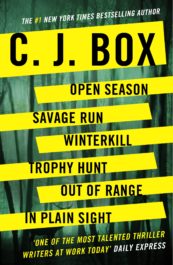