Try Not to Breathe
Alex is sinking. Slowly but surely, she’s cut herself off from everything but her one true love – drink. Until she’s forced to write a piece about a coma ward, where she meets Amy. Amy is lost. When she was fifteen, she was attacked and left for dead in a park. Her attacker was never found. Since then, she has drifted in a lonely, timeless place. She’s as good as dead, but not even her doctors are sure how much she understands. Alex and Amy grew up in the same suburbs, played the same music, flirted with the same boys. And as Alex begins to investigate the attack, she opens the door to the same danger that has left Amy in a coma…
You won’t be able to put it down. Just remember to breathe.

Don’t Close Your Eyes
Robin and Sarah weren’t the closest of twins, but they loved each other dearly. Until they were taken from one another. Robin now lives alone. Suffering from panic attacks, she spends her days house-bound, watching the world from the safety of her sitting room. Until one day, she sees something she shouldn’t… And Sarah? Sarah got what she wanted – a wonderful, perfect family. Then a shocking event forces Sarah to leave her beloved home in search of her sister, Robin. But Sarah isn’t the only person looking for Robin. As their paths intersect, something dangerous is set in motion, leading Robin and Sarah to fight for much more than their relationship…
Two sisters. A lifetime of secrets. One terrible reckoning.

Love Will Tear Us Apart
Fearing eternal singledom, childhood friends Kate and Paul made a vow that if they didn’t find love by thirty, they would marry each other. Years later, about to celebrate their 10th wedding anniversary, Kate and Paul start to wonder, will this be their last? Is friendship really enough to make a marriage? As Kate struggles with a secret that reaches far into their past, the couple’s vow has become the very thing that threatens their future…
Sometimes a promise becomes a prison. 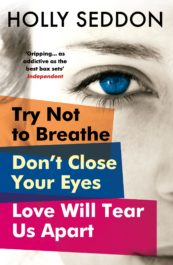