In November 1919, a year after the Great War, four Australian servicemen made a unique and epoch-making journey home. In the open cockpit of a twin-engine Vickers Vimy bi-plane, brothers Ross and Keith Smith and mechanics Wally Shiers and Jim completed the 18,000-kilometre flight from Britain to Australia. The 28-day journey, part of a competition sponsored by the Australian government, made the Smith brothers internationally famous and marked Australia’s emergence into the air age. Ross Smith’s fame would be short-lived: he would be killed in an air accident less than three years later on the eve of an attempt to make the first ever circumnavigation of the world by air.

Born on a South Australian cattle station, Smith had a relatively privileged and cosmopolitan upbringing. He was, nonetheless, working in a warehouse in Adelaide in 1914, where he would have no doubt eked out a quiet and unremarkable life were it not for the war’s outbreak. Enlisting in the light horse at 22 years of age, Smith survived arduous campaigns at Gallipoli and in the Sinai Desert before volunteering for the Australian Flying Corps. Smith’s feats in the skies above Palestine during 1917-18 earned him a reputation as one of the great fighter pilots of the war. By the armistice he had received the Military Cross twice and the Distinguished Flying Cross three times; he was one of only three British Empire airmen to do so during the war. Smith’s skill in the cockpit also saw him assigned the Middle East theatre’s only twin-engine bomber during the war’s final year, a machine he used to support T. E. Lawrence ‘of Arabia’s’ campaign against the Turks in Jordan and, after the war, survey an air-route between Cairo and Calcutta.

Anzac and Aviator is the story of this extraordinary Australian and the fascinating era in which he lived, one in which aviation emerged with bewildering speed to comprehensively transform both warfare and transportation. Born a decade before powered flight and going off to war on horseback, Smith finished the conflict in command of a bomber, the weapon that would come to symbolise the totality of warfare in the twentieth century. 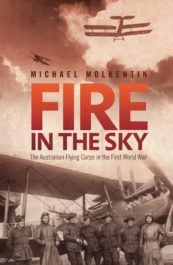