Allen & Unwin have acquired The Illumination of Ursula Flight, the brilliant debut novel by Emerald Street Weekend Editor Anna-Marie Crowhurst, the first in a two-book deal.

The novel, a charming, droll (and just a little bit bawdy) picaresque tale of one woman’s coming of age both on and off the stage in seventeenth-century England, will be published in hardback in May 2018.

‘Oh, how I love this novel! Funny, whip smart and so full of passion, Ursula instantly captured my heart and imagination and I’m thrilled to be working with Anna-Marie to share her with the world. You’ll be hearing a lot more about this wonderfully sparky character and her story in the months to come. This is a major acquisition for the Allen & Unwin list, signalling a strong move towards upmarket historical fiction. Our recent announcement about the new Minette Walters novel was the first step down this path. The Illumination of Ursula Flight will be a key publication for the first half of 2018 and Anna-Marie’s second book will follow in 2019.’

‘I am fascinated by the giddy, heady, sexy Restoration era and its effect on the creative arts – especially for women, who were newly allowed to act on the English stage. I wanted to explore the experience of a woman of the time, battling the same things we all do: scoundrels, bounders, bad luck and heartbreak. This is a tale of girlhood, interrupted and triumph over the adversities of an age.’

The Illumination of Ursula Flight was written as part of the Bath Spa MA in Creative Writing and Anna-Marie’s supervisor Tessa Hadley described it as: ‘a spirited funny romp and yet it feels much more than that too – touching and urgent and vivid. It’s fluent, accomplished, polished, funny and charming.’

Anna-Marie Crowhurst has worked as a freelance fashion and culture journalist for more than 15 years, contributing to The Times, The Guardian, Time Out, Newsweek, Stylist and Emerald Street, for whom she currently covers books, entertainment and lifestyle, as well as writing a weekly column going out to 150,000 like-minded women every Sunday. The Illumination of Ursula Flight is her debut novel. She lives in London. 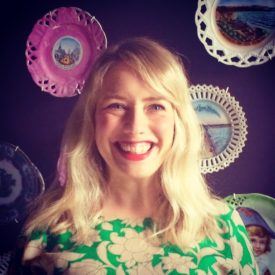