Christobel Kent’s short story ‘A Funny Day For It’

Christobel Kent, author of The Killing Room and The Crooked House, writes beautifully and succinctly about miracles in A Funny Day For It.

The restaurant’s window held a big cardboard heart crudely decorated with plastic roses and red lightbulbs, but behind it was dark.

It was hardly the most tasteful display but then the Carmine was a backstreet trattoria in San Frediano, the humblest quarter of the centro storico.  It had been going since before the war, and was no doubt on its last legs, but they’d had their first date there: it was the Carmine or nowhere.

‘It’s not like we could have got the wrong day,’ said Enzo, but Giuli heard the anxiety in his voice: it echoed a feeling that had been building in her since the morning.  Since 9.20 a.m, to be precise.

‘Don’t worry, tesoro’ she said.  She peered through the plastic foliage. ‘Something’s happened, hasn’t it? I’ll go in.’ On the icy pavement he groped for her hand in the dark.

‘I will,’ he said, and she was surprised: Enzo was shy, as a rule.  She followed him into the restaurant’s chilly interior, the only light coming around the kitchen door and from a couple of logs in the huge stone fireplace.

‘Hello?’  She called into the empty dining room.  On the wall she could dimly make out the row of family portraits that went back to grandmothers with scraped-back hair and black woollen skirts to the ankle, and one from the war.  The building next door to the Carmine had come down under German bombardment, taking half the restaurant with it, but they’d stuck the sign back up on the rubble. Trattoria Carmine, cucina casalinga. Home Cooking.

The padrona Rosina shuffled out through the kitchen doors, her hands held out. ‘Signorina Sarto? I’m sorry.’

At 9.36 that morning the old doctor had opened his consulting-room door with the same words, and the same wearily resigned expression.

There wasn’t very much call for fertility testing at the Women’s Centre – their clients, an assortment of homeless, drug-addicted and immigrant women, were chiefly interested in not getting pregnant  – so Doctor Bruscoli’s quarters were more boxroom than luxury suite.  Close to retirement, he was only in a day a week, and this year even he had smiled to see what date in the second week of February he would be seeing patients.

‘Funny day for it,’ he said, peering over his glasses.

‘Well,’ the old doctor said, and cleared his throat.  ‘It’s not all bad news. There’s no sign of any disease.’  He paused, watching.  They both knew she’d had a chequered past, and good health wasn’t a given: she nodded a little to let him go on. ‘But at your age –‘

He let out a sigh. ‘Any forty-four year-old would have only a fifteen per cent chance of conceiving, broadly speaking, and then – even then there are other obstacles, the quality of the eggs –‘  He came to a halt: she held his gaze dry-eyed. ‘Miss Sarto, one of your Fallopian tubes is completely blocked, the other is scarred .  Your FSH levels are raised, which would suggest that you will enter menopause a little prematurely, perhaps within five years.’

Giuli swallowed, and nodded: she wanted to reassure him that it was only what she had expected but she could not say anything quite yet.

‘Miss Sarto,’ he had said, and she felt for him, he needed to know she understood so he had to go on. ‘It would be a miracle if you conceived a child naturally.’

A miracle.  She had sat quite still and he had put out both hands to her.

The knowledge had sat in the pit of her stomach all day: she hadn’t the heart to say to Enzo, we don’t have to do any Valentine’s stuff.  And now this.

‘I’m sorry Signorina Sarto,’ Rosina repeated. ‘It’s the heating.  The boiler’s on the blink.  We can’t heat the restaurant.’  She half turned to the lit kitchen. ‘Poor Donato’s at his wits’ end.  I doubled the meat order, there’s salad from the market this morning that won’t keep and a fridge full of Valentine’s dessert. Two hundred euro in bistecca alone.’  And she dwindled in front of them into a crumpled apron and a pair of worn old hands.

And it was bitter in the restaurant: in the dark it hadn’t registered at first. At her side Enzo cleared his throat. ‘Put us in front of the fire, Rosina.  The wine will keep us warm, and we’ll have a bistecca between us, the biggest you’ve got.’  Giuli felt his hand in hers squeeze quickly. ‘And let’s have a look at that boiler.’

He was back within five minutes, shaking his head; seated at the table by the hearth Giuli had kept her coat over her shoulders.  ‘I twiddled a few knobs,’ he said wryly.  ‘You never know.’

In the kitchen the meat hissed and spat, and began to smell good: in the dining room they were alone.  Enzo reached into his pocket and pulled something out.

He set it down on the table, a small leather box.  ‘Enzo,’ said Giuli, ‘Please.  Please don’t, I’ve got something to tell you.’  His blunt workman’s fingers rested on the box: she put out her hands, as Doctor Bruscoli had put out his.  And she told him.

‘A miracle,’ Enzo said, ‘Well, I knew that, didn’t I?  We’re enough just the two of us.’  And he opened the box: inside it there was a ring with a tiny perfect diamond.  ‘And anyway, I believe in miracles.’

‘Funny,’ said Giuli, feeling something smooth out inside her.  The logs beside them crackled and shifted in the hearth, as he slipped the ring on her finger. 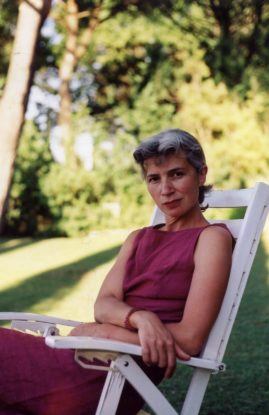