Malcolm Andrews is an Australian author and journalist. In his 45-year career, he has worked for such media organisations as The Australian, the Daily Telegraph (Sydney), the Daily Express (London) and the Nine Network's current affairs program, Today. In the early 1970s, he spent five years in Munich working for the US State Department at Radio Free Europe, which broadcast news behind the Iron Curtain.
For almost 30 years Malcolm was also a regular columnist in Turf Monthly magazine and won several awards for his newspaper coverage of horse racing. He is Australian correspondent for the British weeklies, Rugby Leaguer and League Express, and as such writes more words annually on Rugby League than any other journalist in the world. 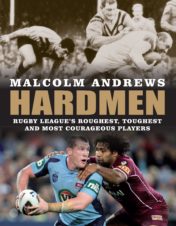