A History of the World in 366 Quotations

From the founding of Rome to the twenty-first century’s war on terror, History’s Daybook presents a vivid, day-by-day perspective on 2500 years of human history through the medium of 366 quotations, each of which is tied to the anniversary of a celebrated historical event, capturing its essence with the immediacy of the eye-witness or the narrative flair of the chronicler.

In History’s Daybook, every day becomes a window on the past: on 15 March 44 BC, blood flows in the Roman Senate as Julius Caesar falls victim to the thrusting daggers of Brutus and his co-conspirators; 1 May 1851 brings a visit to London’s Great Exhibition in the company of the novelist Charlotte Brontë; on 28 June 1919, in the Hall of Mirrors of the Palace of Versailles, brokenspirited
German delegates sign the Treaty that brings the Great War to its fateful conclusion; on 16 August 1665, we walk the silent streets of plagueravaged London with the diarist Samuel Pepys; and on 11 September 2001 we watch in horror as the Twin Towers topple and the world changes forever.

History’s Daybook embraces a wide range of voices, moods and registers, from the powerful to the impoverished, the revolutionary to the reactionary, the propagandist to the idealist and the joyful to the grief-stricken. Both engrossing anthology and informative overview of world history, History’s Daybook offers the reader entertainment and instruction in equal measure: it is the ideal gift book for the history buff. 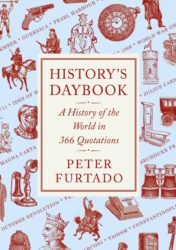